Beware of Spoilers My Fine Friends!! 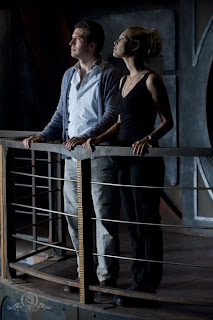 Spoilers For The Stargate Universe Episode Visitation to Follow!!
Oh man, is that number up in the post title right?  This is episode nine already?  That means next week's episode is the last before the mid-season hiatus.  Oh, no!  What I am gonna do for my Stargate fix?  Hmm...I guess I could just read one of the several Stargate novels I have in my reading pile, or watch some of the Stargate shows from any of the three franchises that I have on DVD...gee, I guess I will survive after all.  Well, now that we've established that, let's move on, shall we?  Okay?  Good.

So this week, Destiny drops out of FTL (on what I believe to be just a routine stop), and then all of a sudden, another ship literally appears from out of nowhere.  Not only that, it looks just like the shuttles that Destiny used to have!  We soon find out that the shuttle is in fact one of ours, the damaged one we left back on Planet of the Crazy People in season one.  On board the shuttle is everyone who stayed on the planet.

Commence the "WTF?!?" reactions.  The shuttle hails Destiny and the person on the other line sounds a whole lot like Dr. Caine, who was pretty much elected leader of the Crazy People back in the day.  He says that he has no idea how they got there, they just went to sleep in the shuttle, on the planet, and woke up in the shuttle, in space, next to Destiny.  There is much speculation in the bridge that this might be some kind of ploy on the part of the aliens who built the planet all of these fine folks were last seen on.  It is then pointed out if this is a trick by those mysterious aliens, then considering how advanced their technology is, there's nothing our crew has on hand that will help them see through the ruse.  So they agree to let the people from the shuttle on board but keep them under close watch.

I would like to take this moment to say that not only did I find myself thinking that Rush was making a lot of sense throughout this entire episode, I actually agreed with him on more than one occasion.  I think I'll go have my own WTF moment now, if you'll excuse me....  Okay, back now.  Sorry about that.  Can I just say for the record though, that any episode where Rush is the person making the most sense means that there must be some serious crazy afoot.

Eventually, after giving everyone from the shuttle an exam, Young realizes he has no reason to treat them like they're a threat, so he lets them take up residence in their old quarters.  He points out to Wray and T.J. though that these people all give him the heeby jeebies.  And he wants to know why.

Oh, poor T.J.  As soon as the shuttle docks with Destiny, she goes running to meet Caine and crew, hoping that they will be bringing her baby back.  Young tries to tell her not to get her hopes up, but she can't help herself.  But not only do the people from Planet of the Crazy People (which we learn that they called Eden) not have T.J.'s baby, they have no idea what she's talking about when she asks them about her "visit" to the planet a while back.

Of course, these people have pretty much no memories at all beyond parting ways with Destiny several months ago.  Young has Wray interviewing them all, trying to see what they do remember so they can try to put together the pieces of what happened  while they were on Eden and exactly how they got back to Destiny, which is, by now, all the way in another galaxy.  Rush and Scott go over the shuttle and find that it has been restored to its factory settings and is as good as new, with no logs indicating how it got to where it is, of course.  (I groaned inwardly when the brand new status of the shuttle was revealed, fearing that there was going to be a serious Starbuck ripoff here, but thankfully they went in a totally different direction.)

Everyone (except Caine) is pretty certain that the aliens who created Eden had something to do with getting the shuttle back to join up with the rest of the crew, but no one is really sure of their motives for doing so.  They are starting to wonder if maybe the people on Eden had some sort of encounter with the aliens that the aliens then wiped from their memories.

Then poor Eli sits down in the mess to talk to one of the returnees, who have been more or less shunned by everyone else (Young's not the only one picking up the bad vibes), and he gets her talking about what she does remember about Eden, when suddenly, her nose starts bleeding, she has a massive freak out, and then dies, right there in the mess.  Wow, I would have hated to have been on that lunch shift.

At this point I am thinking to myself, Aha!  The aliens who made Eden totally screwed with these people and then wiped their memories and sent them back, and remembering their time on the planet triggers a kill switch!  And, well, I was wrong.

In the infirmary, T.J. informs us that the woman, Val, died from what all evidence indicates to be massive blunt-force trauma to the head.  This causes more confusion, and Wray decides to try hypnotizing the people from Eden to see if she can get them to remember more that way.  We learn from the next person she talks to that Val actually died on the planet, several months ago, when she was hit in the head by a falling tree.  Then, Peter, the guy that reveals this, dies in session.  His cause of death appears to be extreme exposure and hypothermia.

We eventually learn that everyone on the shuttle died on Eden, and for some reason the aliens temporarily revived them and sent them back to Destiny, where they all get to die again, in order, from what originally killed them.  I've gotta say, I did not see that one coming.  In the end, James finds a Kino in the shuttle and we see Caine's last moments, recording a farewell message and begging for help, just before a bright light swallows up the shuttle and the transmission is cut off.

So now we know that all of those people we left behind (and kind of assumed were dead) are actually dead.  But, bonus, we've got a shuttle again!  T.J. also finally gets closure about her daughter in this episode and finally lets herself begin to grieve.  I have to admit I did like Caine's little speech imploring her to continue believing that her daughter really is in a better place, even if it isn't the better place she had imagined.

While all of this is going on, we also get a few glimpses into the situation with Chloe.  Apparently she is starting to become more and more something alien and less and less Chloe.  Greer tries to convince Scott that he needs to stop torturing himself by continuing to visit her, because she is turning into the enemy and the day is going to come when she is going to be gone, and he needs to deal with that now rather than later.  Scott refuses to listen to this, so Greer pays Chloe a visit.  They have an amazing heart to heart where Chloe works out that when she finally is fully alien, Young is probably going to have her killed, for the safety of everyone.  They also both know that Greer is likely the one who is going to be given this job.  So he has come to say his goodbyes to her now, while she's still mostly herself, and to ask for her forgiveness for doing what he believes he is going to have to do.  The part of Chloe that is still Chloe is taking this all very well, I must say.  She understands that she is in a crappy position, and she isn't expecting any sort of eleventh hour save.  She's just trying to make her peace with the time she has left.

It looks like Chloe's situation is going to come to a head next week.  I have to say, I hope that she doesn't turn into one of the aliens, but that she also doesn't get "fixed."  I would like to see her become something truly other, still Chloe, but not, and become an asset to the crew (and stay that way).  We shall have to see where they take this character.

All in all, I have to say, I liked this episode a lot more than I was expecting it to.  Caine and his followers came back, sure, but they didn't wreak much havoc other than to leave everyone in a huge state of doubt and confusion about what it all means.  It was a very quiet episode, and I thought it was extremely well handled.  Even the bits about faith and God and miracles and science were all done in a way to make one think, rather than to get one's hackles up (whichever side of the fence you may come down on those issues).  I especially liked that they played with some science fiction tropes and the episode started out feeling like it was very predictable but ended up going down a completely unexpected road when you weren't looking.

There were also some really good character moments, like the heart to heart between Greer and Chloe, and Chloe's Kino messages to her friends and loved ones.  There was some lovely humor, such as when Wray reveals she knows how to hypnotize people and Young asks if there is anything else he should know about her.  Her response?  That she was probably overqualified for an HR position.  Eli, of course, gets the requisite Arthur C. Clarke quote about sufficiently advanced technology being indistinguishable from magic (to which Young gets his own quip in reply).  Also, most importantly, there was a cute little couple moment between Greer and Park, yay!

I am very curious to see our big cliff-hanger next week for the mid-season finale, to be sure.