Howdy folks.  I am gonna try to keep this as non-spoilery as possible for movie (and book) seven.  Anything that came before is fair game though. 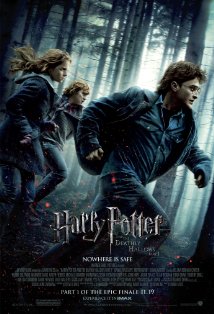 Let me just start off by saying that I really, really enjoyed Harry Potter and the Deathly Hallows Part 1.  I really thought it was just fantastically done.  I am tempted to say that it is my favorite Potter film so far, but, I am not sure that would be fair to do, since I haven't watched the others since the release of Half-Blood Prince.

(I will note that I fully intended to rewatch all six Potter movies before going to see the new one.  It just didn't happen.  I blame USA, they brought back Psych and Burn Notice and made my DVR explode just a little bit, and I really just didn't have the time.  Also, probably, NaNoWriMo might have something to do with that, as I haven't been able to just say, "you know what, I think I'll watch a movie during naptime today" this month.  Sigh.  But what are you gonna do?)

While this clearly wasn't a 100% faithful adaptation from book to film (and let's be honest, no one actually wants that, regardless of what they might think), it was still pretty darn spot on.  More importantly, it kept in line with the slightly altered universe that the previous movies have established quite well.  For example, in the books, Harry met Bill Weasley at the Burrow before the Quidditch World Cup, but in the movies they have never been shown to meet until the start of Deathly Hallows.  This meant there was an introduction, that for a lot of people might have seemed out of place.  But in the movie-universe, it was actually essential.  It wasn't drawn out, and I thought it was handled very well, so it didn't even bother me.  As I said, the film managed to stay nicely within the version of the Harry Potter universe that the other movies have created.  I bet a lot of fans won't understand that, and were annoyed that Bill introduced himself to Harry, but, well, you can't please all of the people all of the time, I suppose.

(As I was typing that last bit, I realized that Charlie Weasley is also introduced to Harry in book four, and was also left out of the film.  In fact, to date, Charlie has yet to make an appearance in any Potter film.  My first reaction to this realization was outright indignation, as Charlie is my favorite of the Weasleys.  Upon reflection, however, I think I might be okay with this.  The second he appears onscreen is the second my dream of him being played by Seth Green (who does play him in my head when I read the books, and yes this is a parenthetical inside of a parenthetical, deal with it) is shattered forever.)

Overall, Deathly Hallows Part 1 is about showing that Harry has grown up, and he has accepted the burden placed upon him by Voldemort the day the Dark Lord killed his parents but failed to kill him.  The first six films set up the world, showed us the worsening situation, and laid out the path that Harry must follow.  In this film, Harry starts to truly take his first steps down that path.  With Dumbledore gone, Harry must lead the effort to fully destroy Voldemort once and for all.  But he cannot do it alone, no matter how much he might want to protect the people he cares for.  That is another big part of this story, Harry learning to accept the help he needs, and inversely, his friends realizing the costs of helping him in this fight, but doing so anyway.

Deathly Hallows does give us a few good action scenes, certainly, but this is a quieter film than a lot of people will be expecting, or at least hoping for, I think.  Part 1 is the calm before the storm.  It's as much about learning how to accomplish what needs to be done, as it is about actually doing those things.  Yes, there is a lot of time devoted to the camping in the woods part of the book, but I really feel like that was handled quite well.  And I'm sorry, but to all of the people who want to gripe about that part of the story (book or movie), maybe you think it is boring, but it is still important.  Harry at the start of Deathly Hallows is simply not ready to go charging after Voldemort.  The challenges he faces in those months of isolation with only Ron and Hermione, trying just to figure out what the hell to do next, those are crucial moments in this story.  To skip over them would be to do this tale an injustice.  I feel like these three young actors, Daniel Radcliffe, Emma Watson, and Rupert Grint, did completely amazing work throughout the film, and with that material in particular.  Without them, this movie wouldn't have had half the impact that it did.

I have seen two primary complaints about Deathly Hallow Part 1 floating around since reviews started appearing, and I would like to address those quickly.

The first, and perhaps most valid, is that this film is going to be incomprehensible to anyone who hasn't read the book before going to see the movie.  I am not completely sure I agree, but I can understand where that is coming from.  Despite all of the information given to us throughout the previous films, a lot from the books still ended up being left out, and quite a bit of that turns out to be important in book seven.  So some things only vaguely touched upon in previous movies, or never mentioned at all, come back here and are presented as if they are something that the audience should already be intimately familiar with.  For example, the mirror given to Harry by Sirius in The Order of the Phoenix, was, as far as I can recall, never even mentioned in the movie version.  But in movie seven, Harry is frequently shown looking at it (and occasionally we see that someone is looking back).  Those who haven't read book seven would, understandably, not really know the significance held by that piece of mirror, or the fact that Harry seems to be seeing someone else looking back from it.

I personally had no trouble following anything, but I have read the book.  I don't think there was too much going on to be inaccessible to the non-readers in the crowd, but I could be wrong here.  Although, I have to day, I have a really hard time believing that there are that many people going to see this movie who haven't by now read all of the books (or at least read through book six if they prefer to see the movie before reading the book).  My brain just doesn't comprehend how someone could watch any of the movies that came before and not want more right that instant.  It only seems natural that they would then go seek out the books.  But, maybe I have a skewed perception of reality there.

The second big complaint I've seen is that there was no point in breaking up book seven into two movies, and, furthermore, that doing so relegated Part 1 to not really being much of a story on its own merits.  There, I have to very much disagree.  To maintain even the level of detail given in the previous movies, one movie was not going to be able to handle everything going on in book seven.  As I said before, this part of the story is very much about Harry getting ready to face Voldemort.  Not just making preparations and finding horcruxes, but actually psychologically readying himself for the fight that is to come.  Part 1 shows us that story admirably, and leaves room for Part 2 to be about Harry as a man of action, giving us the final preparations and then the glorious final battle itself.  I felt like the final conflict of Part 1 is a very important part of book seven that is often overlooked because of what comes so quickly afterward.  Splitting up the book where the movies have done so is an excellent way to give that set of events the importance that they are due.  I am not ashamed to admit I was crying during the end of this movie, I certainly felt the weight of what had just happened.  And the very last scene?  Absolutely perfect.

A few of my favorite (non-spoilery, of course) bits of the movie were:


My only real gripe, per se, it's more of a lament really, is that we don't get to see Harry's farewell with the Dursleys.  That was a truly touching moment as it was written in the book, and I wish we could have seen something more of that on the screen than what we were given.

At this point, really, I don't think there's anything left to say except that July can't get here fast enough.