The Zoo! In January!

When my husband first got me a membership to our zoo, the lovely Fort Worth Zoo, it was a Christmas present, but it was kind of delayed a little so I ended up activating it in January. This means I usually make a trip to our zoo in January each year to pick up my new membership card. Now, they changed the way they do their cards sometime last year, so I actually didn't have to go pick up a new card this year. Still, I had already planned a trip over there with the kiddo when I learned this, so I went anyway, just because it was a nice day and I hadn't been in a while.

Those of you who live around these parts will already know that it usually happens that we have a handful of incredibly nice sunny mild (sometimes warm, even) days in January. These usually occur right before we get that end of January/start of February super cold freeze accompanied by the once yearly (what passes for) snowfall in these parts. This past Tuesday was one of those nice days. It was sunny and clear, and it was a little brisk, but nothing that walking around the zoo couldn't shake off. So the kiddo and I enjoyed a nice little visit with some of the animals. We didn't check out the whole zoo, we just hit up the Museum of Living Art (MOLA), which is the really awesome redone herpetarium, as well as stopping by the penguin house. We did stop by the zebra pen on the way to let Baby Girl count the zebras like she does in her book.

That in itself was really kind of incredible. Barring the aquarium exhibits, she has usually pretty much ignored all of the animals on previous zoo trips. This time, however she was really engaged whenever we stopped to look at something, and she gave much more attention to the animals in the aquarium exhibits as well. I can't wait for spring to roll around so we can actually spend more time at the zoo. It's going to be so much fun watching her discover all of those marvelous creatures!

They have these little statues all over the zoo. I love them! Poor Baby Girl is going to hate them by the time she's six, because she will never not go to the zoo with me and be forced to be photographed with one. 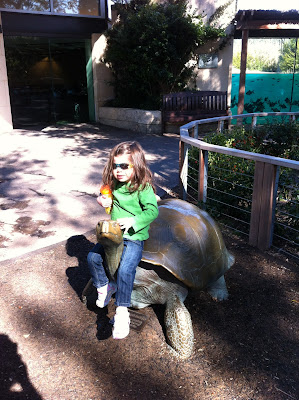 Here she is checking out the fish on the other side of the aquarium, totally oblivious to that turtle by her feet.

Of course, it was pretty darn cool when she did notice him. 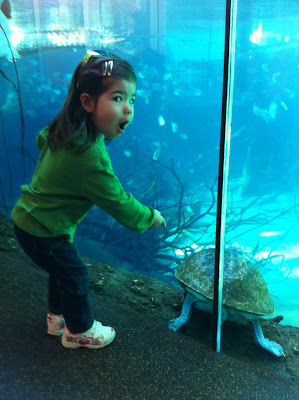 After which she had to make friends. 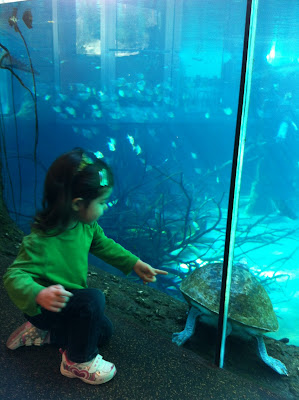 MOLA houses many, many turtles. She had fun trying to race these guys back and forth for a bit. 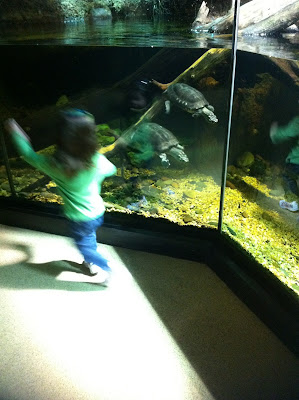 She wanted to be sure I saw the penguins too. 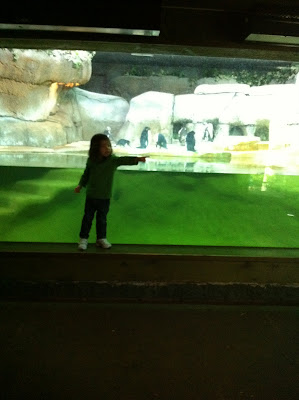 She also enjoyed hanging out with this little guy for a bit. 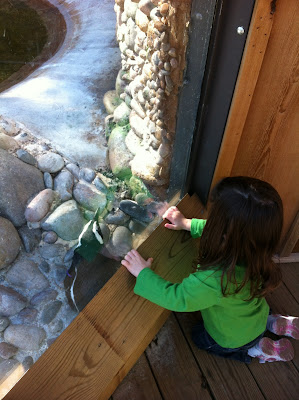 Before we went to the zoo, I took Baby Girl out to lunch, just the two of us. She ate all of her fruit and then went on to totally eschew her chicken fingers in favor of my chicken enchilada soup. She is getting nicer and nicer to eat out with all of the time. While we were enjoying lunch, and knowing we were heading to the zoo next, I decided that I would like to declare Tuesdays "Adventure Day" from now on. It's a day where we usually don't have too much to do in the way of chores and errands. Rather than sitting on my butt in front of the television while she runs around the house like a lunatic, I think I would like to get out of the house for a while. Go to lunch (or maybe pack a picnic) and then wander around this fair city's lovely attractions. On nice days there will always be the zoo, the park, or the botanical gardens. We also have a ton of museums around here, and I think she's getting to the age where she can really start to appreciate these kinds of things. It will be good for both of us. I'm kind of looking forward to it.
Author: SciFiTVFanGirl

Email ThisBlogThis!Share to TwitterShare to FacebookShare to Pinterest
Labels: Fort Worth Zoo, Parenthood