I am okay with this.

I only got into exploring DLC with Dragon Age, so I never bought any of the Mass Effect extra content. Heck, I never even bothered to install the DLC that came free with my purchase of the game.

But now that I've discovered the joy of expanding the in-game universe, I thought it might be fun to see what there was to offer for Mass Effect. (This is partly to stave off my rising urge to play Dragon Age II again already. Or to replay Portal, what with all of the excitement being generated by that game's forthcoming sequel as well.) So today I purchased "Arrival" as well as another DLC that provided an extra companion character. I also went ahead and installed all of the available free DLC. I figured I could play through the new chapter and all of the other extra content would be available to me later on in the year when I do my replay of the first two games in preparation for the third.

BUT. But. Imagine my surprise when I opened up Mass Effect 2 to play "Arrival" and, unlike how the extra chapters in Dragon Age work, found that I just had to hit "resume" and go back to my ship and pick up where I left off. Not only was the new mission post-endgame available, I also had the option to go ahead and play all of that extra content if I felt like it. Huh.

I should be playing Epic Mickey if I am playing a video game at all. It is next on my list. My sister got it for me for Christmas and she is coming to visit in two weeks, I'd like to be able to tell her I have had a chance to enjoy her gift. But...but no. I am running around the galaxy picking up mercenaries and thieves and trying to drive impossible to maneuver land vehicles and completely getting my butt kicked because I have so forgotten how the battle controls work for this game...

As an added bonus, now that my character has successfully romanced Garrus, there is now an intercom in her cabin she can use to "invite Garrus up."

They can cuddle on the couch: 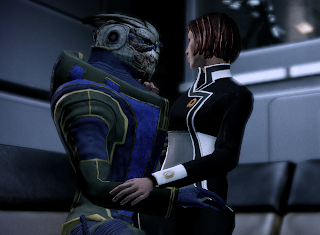 Or they can snuggle up in bed: 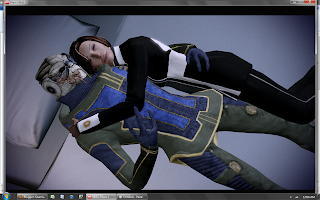 This tickles me greatly.