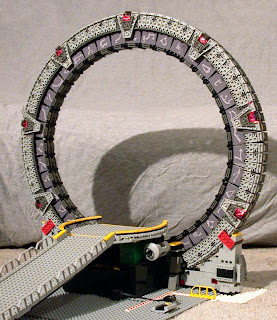 I finally got to watch this week's all new episode of Stargate Universe, yay! (It's kind of been a crazy week.) Seriously, what was Syfy thinking, moving the show to Mondays? Grr. Argh. Now it is going up against Castle and Hawaii Five-O, two already successful, steady in the ratings, geek-friendly shows. This was not well thought-out, methinks. Oh well, what can you do when the evil overlords have spoken?

But I digress, as usual. For now I choose to just be happy to have any new episodes of Stargate back on my television at all (and keep my fingers crossed that we get those movies the writers keep mentioning).

What Happened
SGU picks up from its second mid-season hiatus right where it left off. The Destiny's crew has just been dropped by the Ursini in the middle of a battle for which they are woefully unprepared, against an enemy with which they cannot reason (since that enemy is comprised of machines). Chloe has gone all crazy-commando and taken out her guards, then hacked into the auxiliary control console to do...something. Likely something nefarious. We find out that she has, in fact, contacted the blueberry aliens to let them know where the Destiny is, in hopes that they'll show up and distract the drones long enough for Destiny to make its escape. Um, yay? Anyhoo, they show up and the plan pretty much goes as she thought it would. The blueberries are able to fight back against the drones, allowing Eli and Rush to come up with a plan to jam the signal being sent out from the drone command ship long enough so that it can be destroyed. It goes boom and the drones all stop working, huzzah!

The blueberries' ship is pretty banged up from the fight, so they can't really do anything to attack Destiny for the time being, and we enter a race to see who can get their ship fixed first. Volker and Brody have good news and bad news for Young and crew. Good news is that now they can get the FTL up and running no problem. Bad news? Well, the battle did some serious damage to the ship's shields, without which jumping into FTL would be tantamount to suicide. Oh, there's that other shoe, I was looking for that! Telford calls the Ursini to give them what-for because of the whole "dropping off Destiny in the middle of a battle" thing. They are appropriately apologetic, but admit flat out that they didn't trust the humans to actually follow through on their promise of help if they let them fix their ship first. Rush says they were probably right. Unfortunately, it seems as if the whole exercise was for naught. The Ursini, excited that they can now go home, send a signal to their planet only to receive a mechanized response. Looks like the drones managed to wipe out the rest of their species and take over their home world, and they are now the last of their kind. Bummer. Oh, and even better, now that they have contacted the drones, a new command ship is on its way to take care of the remaining witnesses, I mean, Ursini. Double bummer.

There's a war council and much bandying about of ideas, but it pretty much boils down to this: We are stuck here until we fix our shields. Hopefully we can do that before the blueberries repair their ship and start attacking us and before the next command ship gets here, which could be any second now. The trick they used to destroy the first command ship is not a sustainable one, so it won't work against the new threat. Eli suggests they snag up one of the inert drones so they can start studying the darn thing and figure out how to override the command ship's signal. So Scott, Greer, and Park suit up and take a shuttle out to go collect a drone. Once they have their prize, however, the blueberries make their move. They pull their much larger ship up menacingly next to the shuttle and send the message "No Escape" to indicate that the shuttle's not going anywhere.

Rush gets the idea to give the aliens at least part of what they want and suggests sending Chloe over to the blueberries so they can collect the information she has collected about Destiny and return her to her normal human self, meanwhile they will bring the shuttle with the drone back to get studying it so that all parties can survive the next round of attacks. The blueberries agree to the plan. Eli, Volker, and Brody start working on the recovered drone. It is pointed out that no one is sure if the inert drones will respond to the signal from the new control ship when it arrives. At this point I wonder why Young doesn't have someone start taking out all of the inert ships as a precaution. Rush comes along to get a progress report and says nice things to Brody and Volker, then sends them off to work on the shields. Eli is wondering if Rush has been replaced by a pod person, but then he remarks that they would only be in his way and now he and Eli can get down to some real work.

The blueberries do creepy laboratory experiments on Chloe while Scott waits in the shuttle. Then they send her back all passed out and eerily lit, and Scott makes to leave, only to find that the new drone army has arrived and he can't make it to Destiny. Since his shields are at full power, he decides to join the fray and take out as many of the new drones as he can. Luckily, the old drones do not respond to the new control signal and remain inert. Unluckily, the blueberries have finally fixed their own ship, and, having decided they have had enough of this, jump away, leaving a multitude of extra drones free to increase the attack on Destiny. Eli and Rush aren't having much luck figuring out a way to hack the new control signal though, but the Ursini decide to step in and buy them some time. They jump into the battle and aim the seed ship on a suicide run straight at the control ship. They don't make it very far before they are all blown up. Triple bummer, no more Ursini. But this buys Eli and Rush a little extra time to figure out that they can override the inert drones' friend or foe coding and get them to attack the new wave. (Ah, so that's why the writers decided not to have Young be practical and take out all of those potential enemy ships.)

With the drones distracted by the attack from their own, Scott is able to dock the shuttle and the shields are repaired enough that Young and Rush make the call to go ahead and jump to FTL. They get out of there while they can and head off to the next destination. Cut to the infirmary and we see Chloe all recovered and looking pretty normal so far. But in a quiet moment with Rush we learn that she still retains all of the knowledge (math, alien languages, etc.) she obtained while going all alieny. They discuss how they know the blueberries aren't gonna give up, and now that they know what Chloe knew, they'll only want Destiny more. But Rush seems to take it all in stride, and there endeth the episode.

My Thoughts
Wow, there were some cool space-battle scenes in this episode. Also, holy cow, what a lot of different races to keep track of! Well, one less now. Seriously, that sucks about the Ursini. I kept hoping that one or two would have jettisoned the escape pods and Scott could have scooped them up before rejoining Destiny. I guess permanent Ursini crew members weren't in the budget though. Also, now that the seed ship has been destroyed, we lose that as a potential source of power to dial Earth. I did feel like no one really seemed to acknowledge the weight of witnessing the extinction of the last of another race though. That kind of bugged me. I don't care if they were sneaky and manipulative, they are literally all gone now. Doesn't that mean anything to these people? The scientists especially.

I am still trying to figure out what Rush's agenda is now, too. He was being far too nice (even when he was acting like it was just an act) in this episode. And he and Chloe are developing a really creepy relationship.

Speaking of people acting out of character, Eli seemed not at all concerned that Rush was ready to ship Chloe off to the blueberries and that he might never see her again. What was up with that? I mean, I know they are currently in just friends zone, but...they are still actually friends, right? Friends care when their friends are about to be given up as the sacrificial lamb to aliens who clearly want to destroy all humans.

I did love some more Greer/Park screen time, however. I really enjoyed the subtle ways in which Greer was looking out for her and reassuring her while they were retrieving the drone, and that he did so without being overly protective or condescending. Actually, I loved most of the bits about the drone. The way everyone kept looking at it as if it was a bomb about to go off at any moment (which granted, it kind of was) provided most of the episode's moments of levity, and I really enjoyed that. The whole Eli/Park/Brody/Volker team dynamic going on right now is just absolutely fantastic.

I can think of a couple of logical reasons for why Young didn't order the inert drones destroyed before reinforcements arrived, but it would have been nice to have someone actually mention those on screen. It was really weird that they just left such a huge potential threat hanging around like that without even mentioning what they might do about it. As soon as Young didn't order them destroyed, it was also pretty obvious that we were just biding our time until Eli and Rush figured out a way to use them, but again, it would have been nice to have someone actually comment on that.

That's pretty much all I've got. I think it was a pretty solid episode overall, and a few things happened which could set the stage for some major events down the line. I look forward to seeing them play out (the ones we get to see play out, at any rate).

Have a great weekend folks! Don't forget to swing by Katie Cook's site to check out the new Gronk! Today Katie Cook solves the mystery of why Twilight is so popular with grown women, despite its craptastic story.
Author: SciFiTVFanGirl