Wrapping Up the Adventures of Mathman and Dragongirl

Emerald City Comic Con was definitely a blast, but lest you think that the convention is the only thing my husband and I did in Seattle over the weekend, I thought I would wrap up this series of posts with the rest of the story.

We got a hotel within walking distance of the convention center, which was downtown. This of course meant it was within walking distance of several other places as well. We were lucky enough to experience some pretty nice weather while we were there--I don't think it got below freezing and it was in the mid to high forties most of the time. Maybe that's not super warm, especially for Texans, but it sure beats snowstorms! It didn't even rain that much. We experienced the odd sprinkle here and there but nothing that kept us from going about our touristy occupations. I also have to say that I found Seattle to be surprisingly and pleasantly clean for a big city. I was extremely impressed with the portions of it we saw. All in all it made for a quite lovely visit.

We were about six or eight blocks from Pike Place Market, and since we got in at about ten in the morning on Friday, and the convention didn't start until two, after we checked into our hotel (and by a stroke of luck actually found a ready and waiting room), we meandered in that direction. There was a lot to see there, and I won't even pretend we saw it all, or even close. We went back on Sunday afternoon after we finished our last tour of the convention, and still, I feel like we'll easily discover many new things the next time we go back. It was a fun little labyrinth of shops and stalls and restaurants. On Friday we ate an early lunch at a little hole-in-the-wall Mediterranean place that was pretty yummy, and we found a store selling bacon scented soap of all things (along with bacon, cupcake, nacho, and wasabi flavored lip glosses).  We capped off our first visit with a stop into the first Starbucks for warm drinks and a bit of a history lesson. I will confess that while I knew the franchise to be named after a character in Moby Dick, I did not know that coffee, tea, and spices were the cargo of the ship in the novel, or that the picture in the Starbucks logo is actually a siren and not a mermaid. Yay for learning new things! Sunday afternoon we went back and just wandered around checking out the shops and we even managed to catch a little bit of the singing fish guys. For the record, I prefer the singing fudge guys in St. Louis, but hey, it's part of the Pike Place Market's hook, right?

We were also very close to the monorail that runs to the 1962 World's Fair grounds, which contain the Space Needle and the Experience Music Project-Scifi Museum. Saturday after the convention we went to the Space Needle and rode on up to the observation deck to check things out.


As we were leaving, night was rolling in, and holy cow is that thing gorgeous against the darkening sky! 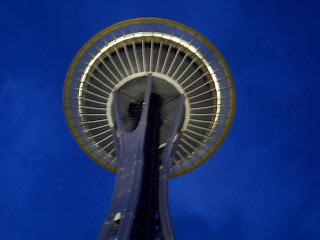 Saturday was actually our sixth wedding anniversary, so we decided to have a nice dinner at the hotel restaurant. The waiter was kind enough to get a photo for us.


Sunday morning we were back to check out the EMP and Science Fiction museum. They were kind of between exhibits, but we still really enjoyed what was there. 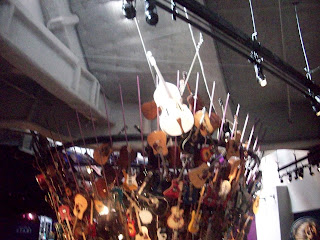 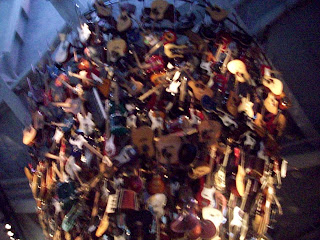 There was a really super neat room with sound booths for jam sessions on all kinds of different instruments, and stations where you could learn how to play with pedals and the different types of percussion instruments. I found a few inspirational thoughts on the walls there.

There was also a really spiffy room with a display chronicling the evolution of electric guitars and bass guitars. It was pretty spectacular, but alas, I got no photos. It was a hip, hip place though.

We of course got bogged down in the gift shop for the science fiction side of things, though we didn't end up buying anything. But they had some pretty groovy stuff in there, I have to say.

Of course, my favorite exhibit, and the reason I so eagerly agreed to join my husband on a trip to the museum in the first place, was this one:

That's right, Battlestar Galactica! Woohoo! There was a really incredible mix of stuff from the original series and the newer run (though I think the newer run was more heavily represented, but it did run for a heck of a lot longer). Some of the highlights, in photo form (you can bet I remembered to take lots of pictures here):


There was a place to stand in the exhibit to "test" whether or not you were a Cylon. My husband thought it was broken because when he stood there nothing happened. But when I stood there, the music from the series (the "All Along the Watchtower" theme) started playing. Hmm. I guess the glowing back should have given it away...

All in all, the trip was outstanding all around. The convention was a blast and we found lots of other enjoyable things to do in Seattle as well. Enough that we are definitely going to be going back there again, probably often. Hubby is lobbying to add it to our list of destination cities for vacations, and I am inclined to agree with him.

And that wraps up my week of blogging about Seattle. Normal blogging to resume tomorrow. Until then, ciao!
Author: SciFiTVFanGirl