November is almost upon us, and that means National Novel Writing Month (NaNoWriMo) is just around the corner. If you are a writer and you haven't heard of NaNoWriMo, I strongly urge you to swing by their website, newly relaunched for the 2011 event, and give it a looksee. It is definitely worth checking out. 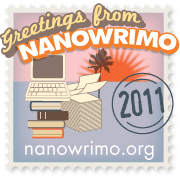 The basic idea is that sometimes you just need a little extra push to get that novel written. So each November, anyone who wants to participate in NaNoWriMo sets this goal for themselves: During the month of November, I will write a complete 50,000 word novel. 50,000 words is about the minimum requirement for most novels in the publishing world, so that's the goal set to "win" NaNoWriMo, though of course you are free to go over that. It breaks down to about 1700 words a day, which really is actually manageable, provided you don't get a massive monster block or anything. The site serves as a networking tool to help you contact other writers in your local area in online forums or for get-togethers to write or hash out stories or commiserate and whatnot. You also get "pep talk" emails from writers throughout the month. Basically it's a huge support net to help get you motivated and keep you going to hit that goal of a finished novel.

Now, let's face it, the time crunch means you have to pretty much skip the editing part of writing. That's kind of the point. I know that I, for one, get hypercritical about reading and rereading what I have already written, sometimes to the point of stalling out on forward progress. Starting stories has very rarely been a problem for me. Finishing them has. I've only finished two complete non-school assignment stories ever--one of them was last year's NaNoWriMo effort. That 1700 words a day goal means that I don't have time to obsess over all of the small details and ensures I just keep on moving forward towards that final page.

Granted, no one who bangs out a 50,000 (or more) word manuscript in a month is going to automatically have something worth publishing come December. What they will have, however, is a first draft. They will have the confidence that comes with having actually written down their whole story. That first draft will then be ready to undergo some heavy editing, possibly expansion, and just might eventually become something you want to shop around. It could also easily become something you stuff in a drawer (or on a spare flash drive, which is then stuffed in a drawer) and never think about again. But the experience will only make your future writing efforts that much stronger.

I have been going around in circles trying to figure out what my story would be this year, and I finally think I have figured it out. I have an outline, I drew a map (then played nation tetris and now need to redraw said map). I've been naming characters (and finding pictures of people to hold in my mind for those characters as I write them to aid in my descriptions). I can't start writing the actual story until November 1, mind you, thems the rules, but I can (and will) lay as much of the groundwork behind the story as possible before then.

I have realized that even though my story this year is set very much in a fantasy setting, it is actually kind of going to be a romance novel, of all things. At least, the central story seems to be more about how these two people find each other, lose each other, find each other again and then what happens to them from there than about the actual events during which this romance takes place. I'm...well, I'm not too sure how I feel about that, but that's the story that wants to be told, so what can I do, huh?

Again, I will hope to post the story here, chapter by chapter, after November if I succeed in finishing the story. I meant to do it last year but wanted to get the editing done first and I really haven't been able to bring myself to dive into the job that editing that particular story will be. If I decide to post here for the 2011 story, it will be an "as is" effort with only minor editing.

As a heads up to y'all, I will be a bit scarce around here throughout November. Currently I am planning to only post Monday through Wednesday, which would be my Stargate Atlantis Rewatch and yarn craft posts, with Thursday and Friday dead days on the site. It is possible that the rest of the week might have to be put on hold as well, but I am hoping that won't be the case.

So...off I go to do some more plotting. Wish me luck, friends! And for my fellow writers out there, please join me!
Author: SciFiTVFanGirl