My Desk Just Got A Little Bit More Awesome

Some time last frickin' year I found out that two series of collector figures had been announced for the video game Mass Effect 2. The second series, set to come out sometime around December I think, I can't even remember now, was going to feature everyone's favorite Turian, Garrus Vakarian. Garrus!!!


You may recall that Garrus was the NPC I romanced in my playthrough of the game. Because he is awesome. Also, because as it turns out, that romance was hilarious. So, naturally you can imagine my delight to learn I could soon have my very own action figure to play with adorn my desk. You can bet I preordered that sucker right away. I also preordered the Krogan companion from the second game, Grunt, which was to be released as part of the first action figure series. That group was supposed to come out sometime around August or September I believe.

Then things got hinky. I don't know if the hold up was on DC Unlimited's end or on Bioware's, but release of Grunt and Garrus got pushed back to January and May of this year, respectively. January came and went with no sign of my Grunt action figure and at some point I received a notification that my Garrus order had been canceled because that item was no longer going to be available. Grr. Contacting the seller from which I had ordered Grunt, I learned that it was still scheduled to be released but there was no telling when exactly. I ended up canceling that order, because, well, like I said, things were hinky.

But some time in the last few months, DC Unlimited finally released the first series of Mass Effect 2 figures. My husband is playing through the game at the moment, and it has been getting me excited about Mass Effect all over again. So I finally caved in and went ahead and ordered my Grunt from Amazon last week.


So now I have a new guardian for my mishmash of a desk. He goes nicely with the random assorted Lego sets (an Indiana Jones minifig courtesy of my nephew and Darth Vader on a T.I.E. fighter), several Wall-E toys, an R2-D2, and a plastic stegosaurus.

I mean, Wrex, the Krogan from the first game, was pretty awesome. But he had nothing on his younger counterpart who, as the back of the packaging says, lacks the bitterness of other members of his species.

Speaking of the packaging. That was kind of amusing in a WTF sort of way all on its own. 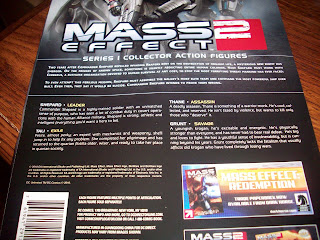 I know it is hard to make out, but those little blurbs in the middle are descriptions of each character available in the first series. The descriptions for Thane and Grunt are hard to argue with, but the one for Tali starts off, "Petite, almost perky...." as if that has anything to do whatsoever with her character. Well, maybe the perky thing, but, I don't think that actually applies to Tali. I guess if we're judging by the standards of other Quarians? Also, don't get me started on the fact that they released a figure for the stock male Shepard only. I guess the vast majority of people who play these games don't bother to mess with the character creator and are therefore satisfied with a figure of the most boring version of Shepard possible. Whatever. (I also assume that this confirms Canon!Shepard as male. Also boring.)

Also, you can just barely see it in the photo, but at the bottom right corner is an add for the 2011 Mass Effect 2 calendar, due out "this September," presumably indicating that all of the packaging for this series was printed up well before September 2010, and yet, the figures weren't released until when? I don't get the comic book industry folks. I really don't. If the rest of the world (even the creative parts--think television productions) ran on the kind of schedule the comics industry did...man, we would be screwed.

Sadly, it appears that the second series of figures has been permanently canceled, which is a complete bummer. But I'll satisfy myself hanging out with Grunt and keep my fingers crossed that maybe someone can be more on the ball when Mass Effect 3 comes out, and that maybe, just maybe, I can still get my Garrus after all...
Author: SciFiTVFanGirl