So, for Christmas my daughter received a My Little Pony nightgown set that included the nightgown and a pair of matching slippers. She adores the set but her favorite part is the slippers, which she calls her "pink shoes."

As I am sure you can imagine, six months of hard wear by a toddler has taken its toll on the slippers. The nightgown is still holding up pretty well, though like most things my daughter owns, it is now way too short (all legs, that one, she's gonna be trouble later on). I noticed a little while ago that the slippers were starting to come apart at the seams in a few spots and realized they were not long for this world. So I decided to try to make the kiddo a replacement pair of slippers. 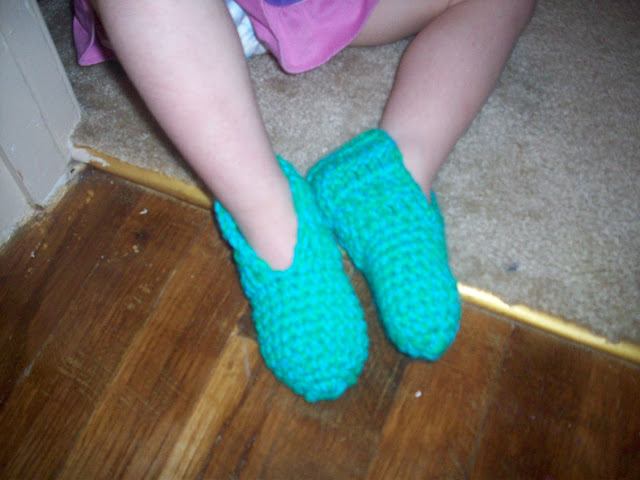 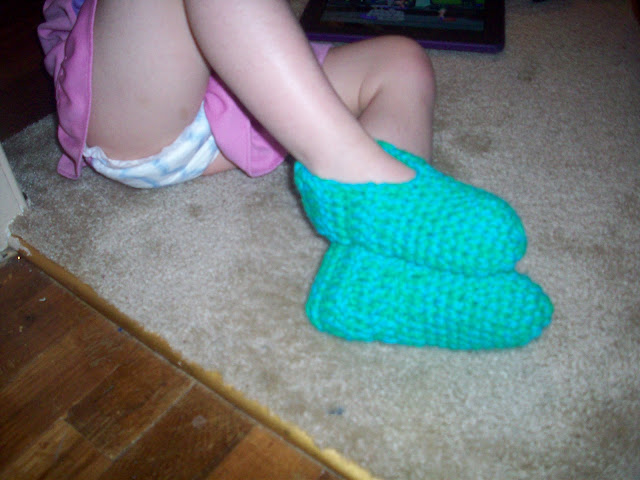 I totally winged the pattern, but it was inspired by the knit slippers that my mom has made for me since I was a kiddo myself. I let my daughter pick the yarn for her slippers out herself, and she very much enjoyed trying them on as I made them (to check fit and see how much I had left to go). Once I had finished the first one she happily wore it as she waited for the second to be made.

My hope was that by engaging her in the process of making them she would take to them as replacements for the "pink shoes" a little more quickly. It has more or less worked. She seems to prefer her "green shoes" (as she has dubbed them) for when she's hanging out in the house and her "pink shoes" at night for sleeping. I'll take it. I've sewn up the holes in the pink slippers, so hopefully they'll last for a bit longer.

I really like how these came out, and I've tried twice to start a pair for myself but the magic doesn't seem to be happening on a larger pair. Give it time though, maybe the third try will be the charm.

In other news, I've started the next blanket and work progresses, if slowly, on my Color Affection shawl. It might be done by the time the weather actually cools enough for me to wear it...