So. Somehow last month I managed to make not one but two pillows. I am not sure how this happened.

But still. It did.

So, since everyone has received their pillowy surprise, I thought I'd share with you guys now too. Yay!

Remember that dragon blanket I am going to be making for a friend of mine? Well, once I had the swatch finished up, I was trying to figure out what to do with it. I knew it wouldn't get incorporated into the final blanket, since I will be buying all new yarn for it to ensure that dye-lots match and whatnot. Also, there is a possibility I will be using a double crochet instead of half-double. 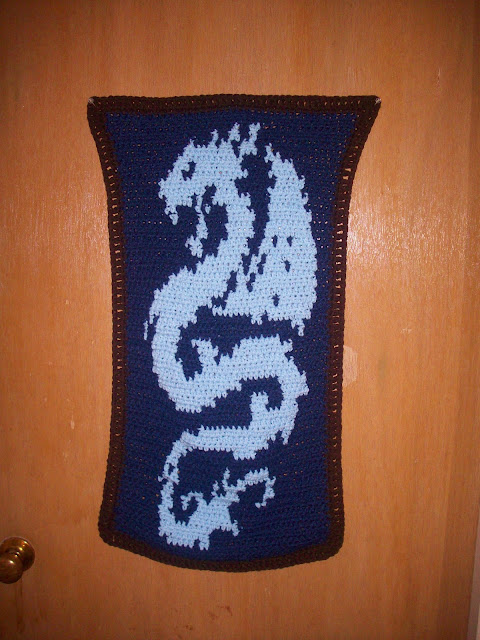 I looked at it for a while and then realized it was remarkably pillow-sized. Also, that my friend had a birthday coming up. So. I made it into a pillow. I used the remaining yarn from the swatch to make a coordinating back panel and then I placed to two pieces together and did a row of single crochet around the edge to attach them to each other. Before finishing the last side, I stuffed it up, and this is what I got:

I used actual fiberfill to stuff it the first time around, but it was super lumpy and had next to no structural integrity. So then I pulled all of that out, measured the "case" and realized it was just about the right proportions for a standard queen sized pillow. So I ordered up one of those and when it arrived, I stuck it in there and closed the whole thing up.

I have to say, I am pretty happy with how it came out. I mean, it's pretty much purely decorative, but still, it looks dang awesome. My friend was also very happy with it. He approved of the colors wholeheartedly, so it will go with his house and match the finished blanket whenever I get that done and shipped to him.

After that one came this:

(Yeesh, I really need to get better at photographing yarn and my projects, don't I? Thank you for putting up with my horrible photos all of the time!)

This project was solely inspired by the yarn, which I acquired randomly in a mystery box from Craftsy. It is Lorna's Laces Shepherd Worsted in the colorway Liberty. The red, white, and blue motif just begged to be made into something star-shaped for my mother (a retired member of the army reserves).

It ended up being a bit smaller than I had intended, but about halfway through the first panel I panicked about using up all of the yarn and scaled back a bit. Thus I still have a good bit of it left over. I am thinking it might be fun to make up a few felted cat toys with that. I was really surprised by how much I enjoyed working with this too. Wool is always tricky for me for some reason. I almost always expect to hate it. I am just too used to synthetic fibers I suppose (although I am getting more used to the nicer stuff as I take on more non-blanket projects).

In more current news, I finished a baby blanket on Friday and worked on the socks a bit this weekend. Started up on the next baby blanket yesterday. I fear that the socks are going to be way too big for me, but if my husband ends up finding them too girly, I suppose I will just have to find someone with big feet who would also like cozy toes to give them away to. I did go ahead and frog that poor sweater. That was kind of sad for me, but it had to be done I think. I do plan to give it another go this summer when I (hopefully) have a little more free yarn time on my hands.

As long as no one else announces an expected baby or wedding this year, I think I can begin to see the end of the blanket-tunnel in sight. Then I can start thinking about what (if anything) I need to be planning to make for Christmas presents. Whee!
Author: SciFiTVFanGirl