So, among the many distractions I faced during my November writing were not one but two open beta weekends for the forthcoming MMORPG Star Wars The Old Republic (SWTOR). The game launches on December 20, with early access being granted to anyone who pre-ordered it. To stress test their servers and try to find any last minute glitches or bugs, Bioware opened up their beta testing to everyone who had signed up to be a beta tester for two different weekends last month. They also gave out a bunch of codes for people who hadn't signed up already to be able to get in.

If you have been paying attention to this blog over the last year or so, it should be quite obvious to you that of course I had signed up to be a beta tester as soon as I learned that was an option. Then I sat on my thumbs for a year and a half kind of sad that I was never invited. Then I got my first invite at the start of November. After that initial rush of "hell yes!!" faded, I started cursing the bejeezus out of Bioware because, well, you know, November is kind of a no-video game month for me. BUT. I have a wonderful husband and he helped to make it work for me to participate in both weekends by keeping an eye on the kiddo so I could play during times I wouldn't normally be on the computer (so as to not detract from my designated writing time). As of this past weekend's beta, Bioware also lifted the non-disclosure part of the beta policy, which means I am free to share with you my thoughts on the game so far! Yay!


I have to say, there were certainly some frustrating moments, just getting into the game (stress test on the servers, yo) and then with the actual gameplay.


Here is my laundry-list of complaints after two weekends of playing:


All of that being said, please don't mistake me, this game is AWESOME from what I have seen of it so far. I made my way up to level ten through the Jedi Knight origin story (or prologue). I got one companion (my droid, T7) and made it to Coruscant before the test ended. For the most part I had a blast playing it. Yes, there were a few times early on when I was so frustrated I contemplated canceling my pre-order of the game altogether and just firing up Dragon Age again, but those moments were fleeting. I fully acknowledge my noob status at MMOs. I know a big chunk of my frustration can easily be attributed to the overwhelming feelings of starting an entirely new game for the first time and figuring out just what the heck is going on. I suspect a lot of the other frustration can be chalked up to my unfamiliarity with online gaming (as well as my hermity nature).

The graphics in the game are absolutely GORGEOUS. It is the Star Wars universe come to life in an amazingly beautiful way. See for yourself.

The story is also pretty darn engaging from what I got to play of it. I guess it helps that I have been reading all of the comics for the game's back story, and I am also familiar with the events of the two Star Wars Knights of the Old Republic games, which set the table for this one. But the game gives you plenty of opportunity to delve into the rich mythology of the universe. The codex entries are very detailed and interesting.

You also get the typical Star Wars scroll-screen setting up each "chapter" of your story. It updates as your game progresses. 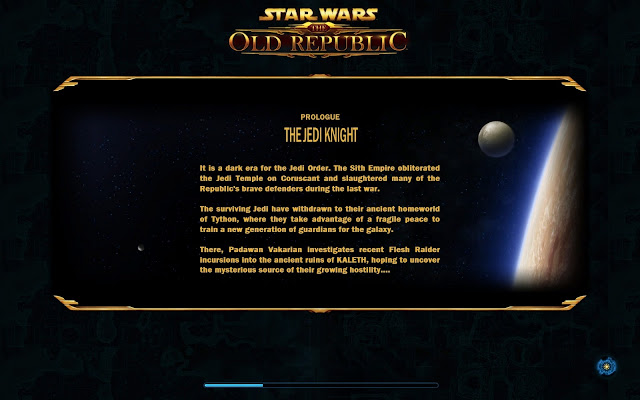 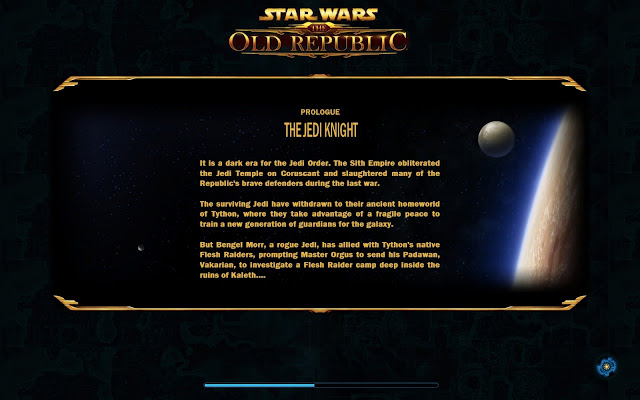 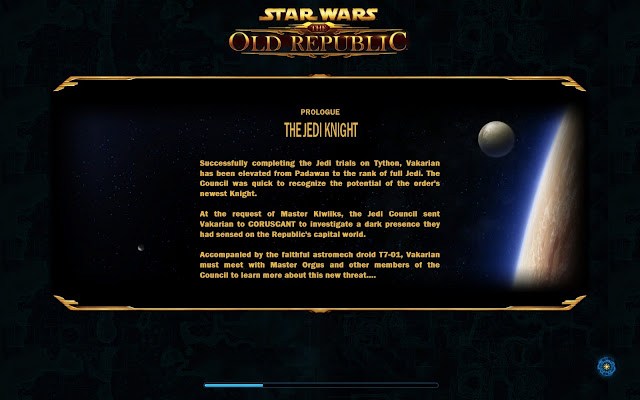 I am not sure if this is a game I will play multiple times. I might play it through once and keep my character on hand for when new expansion packs come out, and leave it at that. Who knows? I might get absolutely sucked into the whole MMO experience. It's always possible. Though at the moment it just really reminds me that even my geekiest of friends are not the same kind of geeky I am--I only have one friend who is also planning to play this game. He lives in St. Louis and keeps a very different schedule than I do, we couldn't ever manage to meet up in-game to play together during the beta weekends. So I am definitely very nervous about the "social" aspect of this game. But here's hoping I end up pleasantly surprised by that. (Hey, if any of you are playing and want to meet up in-game, let me know!)

All in all, at the end of two beta weekends, I am really excited for this game to come out and to get to play it through. I think that, as much fun as the character creator is, if my beta character is still available to me when the game launches, I will probably continue her story. But if not, I can start over and play through Tython again. At least I will be a little bit better prepared to play through that area.

Once the game does officially start, I will launch a new blog to run concurrent with my playthrough called Jedi's Journal. There's not much there at the moment, but please feel free to bookmark the site if you're interested. My plan with that blog will be to write a short form entry each day I play (or maybe after each major story quest is completed) from my character's point of view. Her perspective on the events of the game and the people that she will come across in her journey. It should be a fun experiment, and I'll remind you about it when I start posting there. I will still talk about the game on this blog, but that will be my thoughts on the game play or its effect on my life (or lack thereof) in general, I think.

Eighteen days and counting, folks. Is anyone else as excited about this as I am?
Author: SciFiTVFanGirl