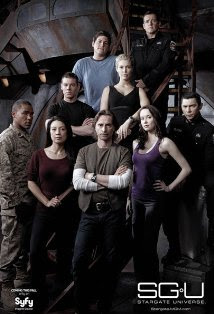 There were quite a few things going on this week's episode of SGU, and of course you know it ended on a heckuva cliffhanger since this is the mid-season finale.  I thought the episode was pretty awesome sauce.  I just hope lots of people out there agreed, because I will, quite frankly, be extremely sad if the series doesn't get a third season pickup.  The decision about that is due to be made in the next month or so, before the back half of season two airs.  So, my fingers are crossed.  On to the episode!

Plot A dealt with the scientists on the bridge discovering an anomalous energy signature about a day's travel (in FTL) from Destiny's current location.  They talk Young into letting them go check it out, promising that it could be an energy source or some sort of cool new toy.  Or, possibly a new alien species.  Volker tries to point out to them all that the last three times they have encountered a new alien species on this trip things have gone horribly, terribly wrong.  No one listens, Park points out that you can't judge a neighborhood by a few bad neighbors, to which Volker retorts that actually that is exactly the standard you should be using to judge your neighborhoods.  He is overruled though, and they go check it out.  Guess who was right about what they would find?  Gold star to you if you said Volker.

They arrive at the energy signal to find out it is actually the combined signals of several ruined and derelict spaceships.  They have, in fact, discovered the remains of some old space battle.  Someone calls it a battlefield.  Camille says that's what it used to be, but now it's a graveyard.  Of course, they decide to explore the battlefield to see if they can scavenge any cool spare parts or toys that aren't broken too badly.  Scott, Greer, and Brody take off in the newly recovered shuttle (how convenient, eh?) and find a ship that appears to be mostly intact, with a bonus hole blown in one side for easy access, yay!  But just after Greer and Brody get on board the derelict ship (with a wonderful little byplay between the two), little spaceships start powering up all over the battlefield/graveyard and attacking Destiny.  If only they had brought Admiral Ackbar along, he would have been able to tell them what was what.  Of course, you know that Volker is walking around grumbling "I told you so." under his breath for the rest of the episode.

They try to defend themselves from the attack long enough for the shuttle to get back to the ship so they can then jump away into FTL.  The shuttle does make it back, intact, with all of its crew (yay!), but it is too late to jump, the ship's FTL drives have been damaged.  Damnit.  Fortunately, just then, right that very second when all hope seems lost, a seed ship appears!  The voice of Colonel Telford comes over the radio and says "Come with me if you want to live!"  Okay, he didn't really say that, but he did tell them to follow him, and proceeded to lead Destiny straight to, and then through, the nearest star.  Hooray, Lou Diamond Phillips is back!

As soon as they made for the star I realized what they were doing.  Destiny is fueled by starlight or something.  That means that it can withstand the heat of a star, which most other ships really can't.  It actually made such perfect sense that I had to stop and wonder why they needed LDP to show up and tell them to do that in the first place.  But hey, it brought back LDP, so I won't complain.  Indeed, we see several of the attacking ships try to follow and get burned up into crispy little cinders.  So they fly through the star and park on the other side, trying to figure out how to fix their ship and get the hell out of there before the attackers figure out they can just, you know, go around the star.

We find out what happened to LDP.  The aliens who took over the seed ship (the Ursini) were desperate try to get home, but they can't because there's a mother ship for all of those little attacker ships blocking their way.  Turns out those attacker ships are automated drones woken up by the Ursini a while back and they have been fighting the buggers ever since.  But if they can take out the command ship, all of the drones will shut down and they can go home.  That's why they wanted the seed ship, because apparently they didn't realize it isn't armed?  Whatever.  Anyway, they made friends with Telford and followed Destiny as soon as they could (we learn it has been a month since he got left behind).  The Ursini make a deal with the crew of Destiny.  They'll give them a lift in FTL to somewhere safe so that they can make the repairs to the ship if they will then use Destiny to take out the drone command ship.

There's a lot of back and forth wondering if the Ursini can be trusted, and if they should accept the deal but double cross them, or if they should just hold up the deal.  Young votes for holding up the deal if the Ursini will let the crew use the seed ship to dial Earth.  So, they hitch a ride, thinking they'll be in FTL for about four hours or so on their way to a safe place where they can make repairs.  But they drop out of FTL way too early and our crew finds themselves facing the command ship.  Turns out the Ursini decided to double-cross them, unwilling to let them make repairs and get the chance to escape before taking out their enemy.  So, they have a damaged ship that can't go anywhere and are severely outgunned by the command ship, which opens devastating fire on them almost immediately.  And there endeth the episode.  We've got to wait a month or two to find out what happens next.  Sigh.

But like I said, there was a lot of other stuff going on too.

Plot B revolved around Chloe's continuing transformation.  She's trying to push Scott away so it will hurt less when she's "gone." She doesn't believe her transformation can be stopped, and actually thinks it is getting close to complete.  At the end of the episode when they find themselves face to face (so to speak) with the drone command ship, a very non-Chloe sounding Chloe convinces Eli to take her to the bridge so she can help them fight the battle.  The guard outside her door starts to protest and she takes him out like it was nothing and then proceeds to beat the crap out of everyone in between her and a control room.  Eli calls for help and they try to seal her into the section but Super Chloe is wily and gets through.  Scott finally catches up with her just as she snaps out of her daze, and we realize she's done something to the ship, but won't find out what until the season starts back up again.

Mini-plot C revolves around Eli's growing crankiness and despondency over the loss of Ginn, and apparently Riley as well.  Oh Riley, I miss you.  So we got to see some interesting character growth with him.  He had some interesting heart-to-hearts with Rush and with Camille.  But there is no real forward movement.  He is still lost and hurt and angry at the world, and coming just a little bit more unglued every day, it seems.  We also learn, thanks to this mini-plot, that the crew has been aboard Destiny for ten months now.  Yay for establishing a timeline!

And finally, mini-plot C revolves around T.J. and her growing friendship with Varro.  We also find out how she's doing in the wake of learning that her baby was never on Eden (formerly known as Planet of the Crazy People).  She now believes that it was the ship trying to comfort and protect her through the neuro-link that caused her to have that vision when she lost the baby.  That is actually a really decent explanation for the nebula that was in her vision and that she saw from the window when she woke up.  So yay, plot resolution, huzzah!

I felt that this episode was actually an excellent example of something that SGU is doing right that the previous two iterations never really managed to get down.  The scientists.  In SG-1 it was more about going on missions and saving the day and being soldiers.  One of the scientists was also a soldier from the beginning, and the other, the roly poly academic type, quickly learned to be a soldier as well.  Atlantis took a step closer in the right direction with McKay, and gave him colleagues to geek out with in Zelenka and Beckett, but still, they were just ancillary characters and it always felt like the scientific part of the mission got pushed aside more often than not.  But in SGU there are five regular cast members that are purely scientists.  The soldiering is done by the soldiers, and they are trying to learn to work with the scientists, certainly, but neither group is trying to do the other group's job (with the exception of the failed coup, but they seemed to have learned their lesson there).  I loved SG-1 and Atlantis, don't get me wrong, but I am really enjoying the sciency (yes, I know that's not a real word) side of SGU.  In at least half of the episodes so far, there is no actual bad guy to shoot at, the problem is in figuring out how things work so that they can be fixed or kept working.  I am really digging that.


All in all, an excellent episode, and it did its job, leaving me wanting more.  Too bad more won't be coming any time soon.  Stupid Syfy and your weird programming schedule.  Bah.  This episode had a little bit of everything:  character development, many little moments of humor, technobabble, a space battle, aliens, and artificially intelligent spaceships.  It actually felt to me like a classic Stargate episode.  I don't think every episode of SGU should feel that way, but every once in a while it is nice.

Bonus!  Next week we get holiday episodes of Eureka and Warehouse 13 to ease us into the hiatus gently.
Author: SciFiTVFanGirl