So I have been thinking for a while now that I'd like to do a semi-regular feature to tell you about each of the many, many webcomics that I follow.  In an earlier post I told you about the comic Looking for Group, so I'm just going to go ahead and cross that one off the list.  I also won't be including Gronk, since I link to the new update on that one every week.  But fear not, gentle readers, for that still leaves over twenty comics for me to point  you toward.

What?  Why are you looking at me like that?  I like comics.  This world doesn't have enough happiness (or snarky nerdiness, for that matter).  Comics help to fill that void a little bit at a time.  Webcomics are slowly steamrolling over the old-school newspaper comics, sad to say (heck, I read all of my old-school strips online, without visiting any newspaper sites, so what does that say).

So, without further ado, I bring you the first official installment of Webcomics Are Awesome!  I hope you enjoy. 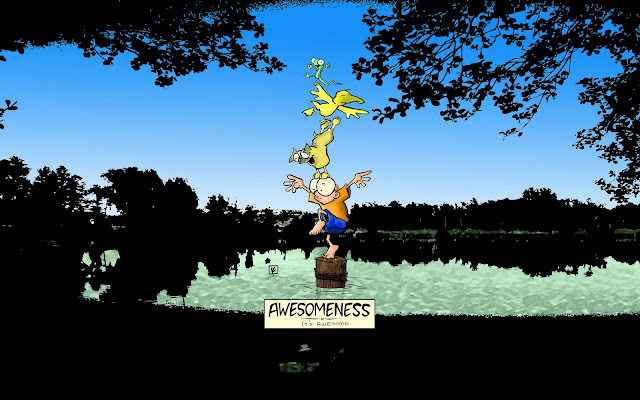 We're going to start off with a really truly wonderful strip called Sheldon, which is written and drawn by Dave Kellett.  Here is the premise of the comic that Kellett gives on his website:

"Sheldon is a sarcastic, nerdy family strip filled with pop-culture references and fun, random storylines. At its center is this weird, wonderful little family: a boy, his duck, and the grandfather that raises them both. It's a strip of geeks, for geeks, drawn by a geek. You'll dig it: trust us."

And that is a pretty good summary.  On the "New Here?" part of his website, you also get a brief description of each character featured regularly in the strip.  Since that original little summary was written, Sheldon's family has also been extended to include Sheldon's pet pug, Oso, and his duck Arthur's son Flaco, who is a lizard (it's all explained in the strip).

I would extend the summary by telling you that Sheldon, who is about ten years old, is actually a software billionaire, though he only goes in to run his company (Sheldonsoft, of course), every once in a while.  His blue-collar grandfather does his best to keep Sheldon living a normal life though.  Really, Sheldon isn't so much concerned about his money as he is about keeping Arthur from spending it all on silly silly things.

But as Kellett says, the heart of this strip is that it is about a geeky little boy, and despite the talking duck and the insanely intelligent lizard (that speaks in a language consisting only of the word "squee"), it is this heart that keeps this story so darn believable.  It is warm and touching and funny all at the same time.  I also feel like this is a comic that appeals across a wide variety of ages.  Young geeks can see themselves in Sheldon and his friend Dante, older geeks are taken back to when they were that young.  People who live with and love geeks but don't always understand them will find Gramps (and often Arthur) quite familiar, and those with a sense of adventure will be hard-pressed not to fall in love with Flaco.  There's an added dimension for people who own pugs, of course, as Kellett himself does, in the ongoing adventures of Oso.

I originally stumbled across this strip from a link on Whedonesque, and then another, and then another, and after reading the strip and enjoying the repeated Firefly and Star Wars references, I ended up just subscribing to it.  This is a strip that I share and recommend often.  I would like to say it is my favorite webcomic, and maybe it is, though there are so many that I love for so many different reasons I have a hard time placing that qualifier on any these days.  But this one is definitely in the top three.

New installments appear Monday through Friday and you can check them out at the Sheldon website, subscribe via RSS feed, or sign up to have the strip emailed to you daily, for free.  (Note that there is also a Saturday installment, but that is actually for Kellett's other strip, Drive, which I will be telling you about in another post.)  You can jump in with the first strip here, but be warned that this strip has been running for nine years now (and was running seven days a week for a lot of that time), so it's quite a slog if you want to catch up with all of it online.  You also have the option of just checking out a bunch of random strips from the archives, which I think is pretty neat.

Kellett also has done a pretty good job with the merchandising aspect of the comic.  He's got all of the installments released in book form (the eighth collection just came out, actually).  The artists editions are a little highly priced, but worth it, and a plain version is totally affordable.  He has also released a few individual collections, about pugs and literature, collecting the strips focusing on those elements.  There are of course shirts and stickers and buttons as well.  I am waiting for the plushies to arrive, but other than that, I am pretty satisfied with what there is to buy (and own quite a bit of it, truth be told).

One of the coolest items you can buy, however, is the original art from any given strip.  Each strip is hand-drawn by Kellett and then loaded into his computer-machine to be shared with us on the web.  But if you really really love a particular strip (and if someone hasn't beaten you to it), you can buy that original art.  I own one (for this strip), it is one of the best Christmas presents I have ever gotten (I love my husband). I just think that is a really cool thing that Kellett does, and I have my eye on a few other strips as well, though they are not cheap, and so will have to wait.  They are so totally worth the price though, I promise you.

Finally, I will close by saying that the last thing which recommends this strip so highly to me, and therefore why I recommend it so highly to you, is that the creator is such a darn nice guy.  If you email him, he emails you back, personally.  He completely and totally appreciates his fans and acknowledges that our lust for merchandise is what allows him to do this for a living.  Also, he's pretty darn funny--if you do decide to check out the comic, be sure to give his blog entries a gander as well.  He also makes himself accessible, going to as many comic conventions as he can and planning meetups with his fans in those areas when he is in town.  One of the reasons I am so keen on going to Emerald City Comic Con this coming year is because he is a regular attendee and I am really excited to hopefully get to meet him.  And get my high five.

So, I hope you will check this comic out.  It really is worth the read, and who can't use a daily smile, am I right?
Author: SciFiTVFanGirl