Ooh, Look What I Made

So, now that Christmas has passed, I can reveal to you a few of the projects I have made in the last little while, yay!

Let's just dive right in, shall we?

I made this set for my mother-in-law for Christmas.  Like the tam and scarf I made for Flick Filosopher, I used the pattern of the hat for the scarf, though I changed it up a little bit.  I was much much happier with how this one came out.  Also, it used less than a skein of yarn for the set, and I worked it up in just a couple of days.  This is an excellent little last-minute gift that I will definitely be keeping in mind in the future. 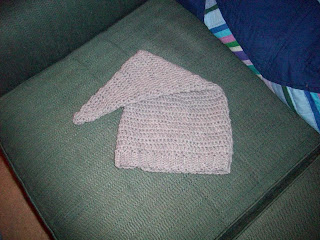 I totally improvised the pattern for this little cap, which I made for my husband's stocking.  He is rarely seen without a hand-made beanie on his head during the cold months (he has a few, made by myself and by my sister).  He even likes to sleep in them, since he is a freak of nature and is incapable of burrowing under the covers like a normal person (i.e., like me, the bedtime burrito).  Um, I digress.  I love my husband very much.  I was pondering whether to make him a new hat or socks for his stocking and he mentioned that as much as he loves his beanies, they never stay on at night, so I wanted to try to make him a hat that would actually stay on his head while he is sleeping.  So far, this one seems to have worked!  I modeled it after the old-fashioned sleeping caps you often see in movies.  I am pretty proud of how this one came out.  Also, the Wool-Ease is my favorite new hat and sweater yarn by the way.  It is super warm and soft without being crazy thick, and as a bonus, is completely machine washable and can even go in the dryer!  I call that a win.

I initially made these to go in my daughter's stocking, but ended up stashing them to go on the Christmas tree next year instead, because the fit is not all that great.  The wrists openings are too wide and the thumbs are too small.  I improvised this pattern because the smallest I could find for mittens was for 2 year olds, and my daughter at 16 months is still fitting comfortably in some of her 3-6 month pants (though they are a bit short).  She's healthy, but she is a tiny little thing (which she certainly doesn't get from me).  In addition, most of the patterns I found called for really bulky yarn (like Homespun), which I wasn't feeling for the project.  So I may just have to try again next year, I guess.  I still thought they were pretty cute though (which is why I've relegated them to ornament status), and they only took a day to whip up, so not a complete loss, all told.

So this is the project I was putting off working on when I made my husband's hat and my daughter's mittens.  I'm not completely dissatisfied with how it turned out, but it is not exactly how it was supposed to be.  The top is supposed to be an overlapped V, sort of like how a wrap-around shirt looks.  Also, when I was putting the skirt and the top together and trying it on to see how that would look, what it looked like was a maternity top.  Since I have no plans to need a maternity top again, well, ever, that wasn't gonna fly.  So, I did several rows of single crochet at the top of the skirt to give it that waist panel before joining the top and bottom halves.  I think that if I were to make this top again (or if I could go back in time and give myself some tips), I would keep a better eye on my gauge (I had two skeins of yarn left over when I was done), and I would probably make the next size up, at least for the top half of the shirt.  But, it is cute how it is, and I like the sparkle in the yarn.  Vanna's Glamour is a little too thin for my tastes, and that strip of sparkly means it is a pain to wash, but with another yarn, this could come out really nicely, I think. 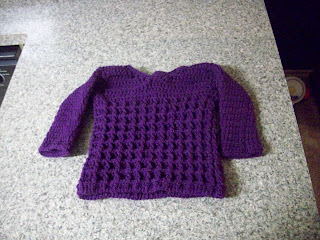 Okay, so after I finished my Jewel Top, I finally came back to the sweater I was trying to make for my daughter.  I ended up going with a different pattern, because I wanted something more solid for the cold weather.  So I took the pattern for the Thermal Scarf and used it to wing a sweater.  For ease of putting it on and getting it off, the neck is a shade too wide and the sleeves are a shade too narrow, but it actually fits her really well and I am pretty happy with how it came out.  She seems to enjoy it as well.  The scarf I just made from the pattern, making it a bit narrower and shorter.  It took about three days for both of these items and only about a skein and a half of yarn (I love the Red Heart Super Saver skeins).

Right now I am working on a cowl for myself, and though it is not turning out how I expected (but, I will note, that is an error on my part, because I was expecting something different than what the pattern was intended to produce), I am really liking how it looks.  It should keep me nice and cozy this winter.  I'll have more on that once it's done, to be sure.

After that I have one more sweater to make and then I am gonna start lining up my yarn craft plans for the new year.

For anyone interested in the patterns from Lion Brand, they are available for free on the company's website, though you do have to register (totally free) with the site to see them.  That's why I didn't link directly to the patterns, but their search tool is pretty user-friendly, so you should be able to find them no problem.  As for my "original" patterns, I really, really hate writing out patterns, so even when I start out trying to keep track, I usually forget to record my steps well before I get to the end of the project.  Wonder of wonders, I did record the pattern I used for the Winter Warmth scarf.  I put it in the project details on my Ravelry page.  My user name there is AtlantisDragonGrl, so feel free to check that out if you have an account.
Author: SciFiTVFanGirl