Game one of the World Series has come and gone with a Giants win, sigh.  BUT, it was just game one after all.  We can still do this.  Watching the game last night I was struck by a funny realization.  I have crocheted in exactly two baseball stadiums.  And do you know which two?  That's right, the ballparks for the Rangers and the Giants.  I even have photographic evidence, see:


Right next to me that's my mom (knitting) and then my little sister (who lives in the bay area, which is why we were at that game).  I was making a shawl for one of my best friends for her wedding at this game.  AT&T Park really is a beautiful ballpark, especially at night.  Also, the seats in front of us had cup holders attached to the back that made a perfect yarn holder!

Of course, I have also crocheted at the Ballpark in Arlington, my home team's home:


I was making a dish towel there.  I've done a few other crochet projects at that stadium (including my first pair of socks) but I can't find any other pictures.  It was frikkin' hot that day and we were directly in the sun, until about a third of the way into the game, after which it got much better.  This was Baby Girl's first baseball game.  You can see her on the right sitting in her daddy's lap, trying to chew her way through the cap on the Sprite bottle.

It didn't even dawn on me until I was talking with my sister on the phone today that it is both of our home teams going up against each other in this series, that's just crazy!  So naturally there's been a little bit of good-natured ribbing.  I have a feeling whichever team wins, one of us will have teasing ammunition for a while to come!  My poor mom doesn't know who to root for (though I think she's leaning towards the Giants) but my grandmother told me she's rooting for the Rangers for me.  It is possible we're a baseball family.

Adding to the blow of my team losing the opening game of the series, Syfy officially canceled Caprica last night.  Sigh.  Remember that rant from Tuesday, about how I am not too sure that Syfy actually cares about its scifi programming anymore?  Yeah.  They aired half a season, waited until the start of the next television season to air the back half, after moving it to a new night where it was up against some extremely stiff competition, and gave it four episodes before pulling the plug.  Way to show faith in your programming, Syfy.  They're not even going to burn off the remainder of the season and let us end the year with a bang.  Oh no, they're holding off the rest of the season until some unspecified time in  2011's first quarter.  Grr.  Argh.  Think happy thoughts Cori, think happy thoughts.


Hmm...happy thoughts...ooh!  I did get my new comic books for the month yesterday! 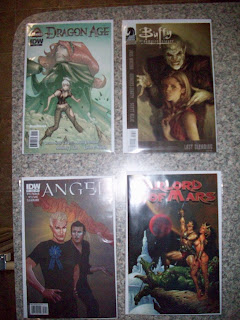 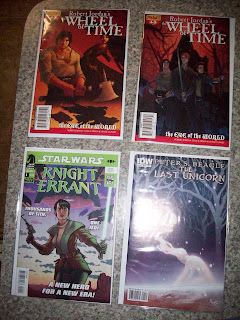 Ooh, I am excited to do some comic reading!  I realize I have absolutely no credibility as a comic book geek, since all of the series I read are either adaptations of existing novels, series set in various video games or scifi franchises, and continuations of canceled television series.  But that will not stop me from getting excited about my new comics nonetheless!  Maybe I should keep the stack close by during tonight's game to read in between plays, just to keep my spirits up....
Author: SciFiTVFanGirl