I'm Trying to Keep Up With My Brain Today

But really, it's been a bit difficult.  It's just been racing all over the place since yesterday.  This is largely because I got struck with the huge Mallet of Inspiration regarding my Halloween costume (which I need to have ready one week from today).  Until yesterday, I had been thinking that if I ended up dressing up for anything Halloweeny, I would just reuse my peasant/wench costume from a few years ago, because I hadn't felt like getting anything together.  Well, that's not entirely true.  I have been slowly figuring out how to put together a super cute Kaylee Frye (from Firefly) costume.  Here is the look I am wanting to achieve: 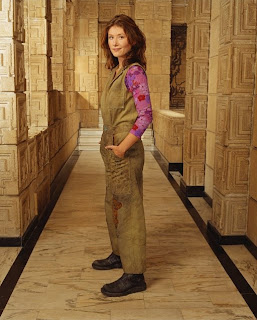 The second picture is her "basic" outfit, though I definitely want to complete it with accessories/hairstyle for the scene from the pilot, which you can see in the fist picture.  See, my husband and I have decided we would like to start going to genre/comic conventions every once in a while, and I thought it would be fun to have a costume put together that I would wear to these.  The main requirements of course would be that it be a costume of a character I love, be something that would be comfortable to wear (especially wandering around a convention hall for hours), and be something that I could put together with my limited sewing skills (i.e., that I could find all of the pieces and would need to make limited alterations to).  Kaylee fits the bill perfectly for all of this.  I had thought I might try to get the basics assembled for Halloween as a kind of test run, but quickly realized that I will need to do some serious searching to get this as close to accurate as I would like it to be.

So, I kind of fizzled out on getting Kaylee put together by this Halloween, though she is still very much on the back burner.

Then, yesterday, I found out that the Halloween party tomorrow night that I couldn't go to has been moved back to next Friday, when I can go.  And I found myself suddenly in need of a costume.  I considered just recycling the peasant costume, but it's just a cheap store-bought ensemble.  It's got some potential, mind you, but I get the impression that the people throwing this party are a lot more serious about their Halloween costumes than I normally am.  So I was sitting on the couch thinking maybe I'd just check out the costume aisle when I go to the store next week and see if there was anything there that I could combine with my existing costume for something more interesting, when a little thought flickered through my brain.  I blinked, went "huh," and tried to go on about my life, but the thought turned around and came back for another, slower, pass.

For those not in the know, Amy Pond is the newest companion on the wonderful series Doctor Who.  The most recent season of Doctor Who has gotten a lot of scrutiny because there's been a new companion AND a new Doctor.  And both of them are portrayed by exceptionally young actors.  But I am in the group of fans that have absolutely loved Matt Smith's performance as the good Doctor so far, and that is at least in part to his companion, played by the amazing Karen Gillan.  Together they are just extremely adorable.

But, back to costumes.  Amy wore a few different outfits throughout the season, naturally, but here's the one that stood out for me: 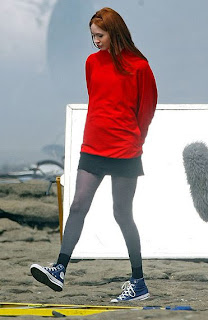 And I realized this would probably be super easy to put together in a week.  So since that thought occurred to me, I've been doing research online, tracking down items, making lists, and all of that.  It has paid off so far.  I have found the sweatshirt she wears (forum consensus is that it is this one), and there is a store in Dallas that carries it.  My husband has a gig in Dallas tomorrow and offered to head out early and pick up the shirt for me, so they already have one on hold for me!  I love my husband, he is truly awesome.  I've found a few good candidates for the miniskirt online (one of which is from Old Navy, so I can go to the store and actually try it on first), but I am first going to hit up some thrift stores today to see if I can find one there.  Given that it is Halloween time, I have high hopes that I can track down a decent and not too expensive red wig.  Other than that, it is just picking up the pantyhose, socks, and a headband, and hoping that I can track down some blue hi-top Chucks in an actual store so I don't have to pay the ridiculous price of express shipping.  Huzzah!

I am not going to worry too much about accessories (i.e., jewelry) right now, but once the I get the season on DVD next month, I can keep an eye out for any other pieces I'll need to pick up down the road to perfect my costume.  That way I'll already have one con costume in the bag, and I won't have to feel any kind of pressure on taking my time assembling my Kaylee costume.  I am really quite pleased with myself, I have to say.  Part of me wants to use this as an excuse to justify getting that sonic screwdriver I've had my eye on, but technically that wouldn't be part of Amy's costume, so I will have to make myself wait on that.

And yes, I do know that it is unlikely anyone at that party next week will recognize my costume.  But I'm okay with that, because I will know.

Let's see, I have a few more tidbits for you before I let you go for the weekend.  Flick Filosopher linked to this amazing "intro" for Star Wars using the Macgyver theme music.  It is beautiful.  Check it out.

Also, here's some more behind the scenes dirt from the making of the original trilogy for you.

And in a slightly Star Wars related item, Joel Watson has a new shirt up in his Hijinks Ensue store, based on this comic strip.  Ewok Stare, I love it.

Here's a sneak peak at the upcoming Syfy original movie Red:  Werewolf Hunter.  It's a re-imagining of Little Red Riding Hood starring Felecia Day and Kavan Smith.  I don't care if it's a cheesy made for TV Syfy flick, I am super stoked about this.  Felicia Day.  And Kavan Smith.  'Nuff said.

Oh, and the web series Riese, that I wanted to start watching forever ago, but couldn't because they pulled it off the web for retooling, is coming back via Syfy.  That's pretty spiffy.  Plus, it now has added Amanda Tapping.  Never a bad thing, IMO.

And lastly, it's Friday, so you should go check out the new Gronk strip.

Now, go forth and enjoy your weekend.
Author: SciFiTVFanGirl