Setting Goals is Important, But So Is Actually Reaching Them

Happy Friday!  Learn how to carve a pumpkin in today's Gronk! 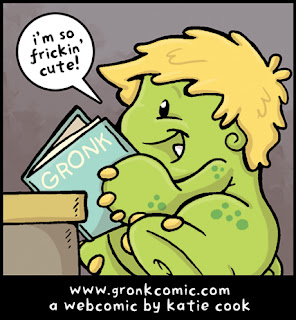 So, I have an announcement of sorts to make.  I have decided to participate in this year's National Novel Writing Month.  For those of you unfamiliar with NaNoWriMo, each year in November, writers around the world get together and each of them write (or at least attempt to write) a 50,000 word (175 page) novel during course of the month.  That works out to about 6 pages a day, so all it really takes is an idea for a story and the dedication to actually make the time to sit down and do it.  The big selling point of NaNoWriMo is that it provides a community for writers to get together and help each other meet their goal.  The idea here is quantity, not quality.  Just get a first draft written.  Then, you can go back and fix it up all you want.

So, I have my story idea, and I am starting to assemble my cast of characters and do a little outlining and world building--you can have all sorts of background material assembled beforehand, but you can't start writing the actual story until the first of the month.  I am officially taking a hiatus from video games in November so that I can devote that time to writing (and give myself a break to recuperate from the intensity of Dragon Age before diving into Morrowind).  I even have a local friend who has signed up to do it as well, so we are going to plan to make a few "writing dates" during the month to get together and just write sans husbands and babies.  I am super excited about this.  And I am sharing it with all of you, and planning to make frequent updates on Facebook so that I will actually stick with it.  My biggest obstacle in writing throughout my life has been just getting the story finished.  I usually start off pretty strong and then get stalled, wander away, and never come back.  I am determined not to do that this time.  I don't care if what I churn out is absolute crap (I hope it's not), but I am going to finish, dang it.

If any of you out there have been kicking around the thought of writing your own novel, now is the time to give it a go!  Head on over to the site, sign up, add me as a buddy.  We'll keep each other on track!  My user name is AtlantisDragonGirl.  Let's do this, people!

In entertainment news, looks like the film production of The Hobbit is finally on track and moving forward.  It's been greenlit, with Peter Jackson officially directing (as he should have been from the beginning), and the cast is starting to be announced!  It is just flat out incredible--and I am in love with the idea of Martin Freeman as Bilbo Baggins.  Nothing but good can come of this, folks.

And finally, for anyone wondering, today is the first (of two) Halloween party I'm going to this year, and I did manage to get my costume assembled in time!  My husband picked up the sweatshirt from American Apparel last weekend for me, it was even on sale.  I have to give Doctor Who's costuming department huge props on their taste in sweatshirts, too, this thing is awesome comfy (I may have "tested" it out on Sunday).  I found a skirt for $3 at Berry Good Buys.  It's not quite as mini as dear Amy's skirt, but it is about as mini as I personally should ever be wearing (and it has attached shorts inside, double yay).  I was a little worried about finding a pair of Chucks in a bricks and mortar store in the style and color I needed, but then I remembered that Foot Locker totally carries a big selection of Converse and I had success there.  I couldn't really tell from my reference photos if her shoes are navy or royal blue, but they had navy in my size so that's what I went with.  I found a red wig that (after a washing and thorough coming/brushing out) will do alright for now,  and I rounded the costume out with some black pantyhose, a black headband, black socks, and a gold watch (that I found on clearance for $7, score).

I will try to get some photos of me in the costume to post for you as well.

And finally, I would be remiss if I didn't mention that it is my alma matter's Homecoming weekend.  Go Frogs!  Also, go Rangers, you only have to win one more game! (Please do it tonight so I don't have to drive through game traffic on my way to Dallas tomorrow, kthxbye.)
Author: SciFiTVFanGirl