Have you heard of Squishables? No? Then get yourself over to squishable.com immediately. It will change your world.

Basically, Squishables are pretty much what they sound like: super squishy stuffed animals (and other things). Someone must have been looking at a beach ball and thought to himself, "Hey, you know what would be awesome? A beach ball I could hug." Thus the Squishables were born. They come in many varieties (including Cthulhu and the little robot mascot for Android phones), and in a few different sizes as well (mini, regular, and the new line of "massive").

I first found out about these guys through ads on a couple of the webcomics I read. Then one or two of the webcomic artists started mentioning Squishables in their posts and my curiosity got the better of me, leading me to click over to the site and check it out. I have been coveting many of them ever since. Then Ryan North of Dinosaur Comics went and worked with the fine folks over at Squishable to design a squishy version of T-Rex. Then they went and made a mini Squishable T-Rex.

I finally caved in last month and ordered myself two mini Squishables, the dragon and the T-Rex.

As you can see, I wasn't kidding about the beach ball thing.

Guys, these things are so freaking soft, it is amazing. Also, very extremely huggable. I literally had not even gotten the dragon out of the box before my daughter came and stole it from me. Sigh. I am a big girl though, and I can share. She loves these things, and I can use her as an excuse to justify them a little bit, so that works out.

The dragon was the first design to get launched in the massive size, which means there are two more sizes I need to get still. You know there is no way I am not going to end up with all three. The price tag on the massive Squishables is a bit steep though, so I am going to have to be patient. That massive dragon is one of three items on my "not gonna happen" birthday wish list.* A girl can dream, right?

I also really like this company because the people running it seem like a good bunch. They are one of the few companies I don't mind following on Facebook because they really understand how to use it as a tool to get people to love their brand without being annoying. They invite people to send in photos of themselves with their Squishables (or just of their Squishables doing interesting things) and post them on their site's gallery. In fact, right now they are donating a dollar to the Humane Society for every photo people send in. That is pretty awesome. On FB they will post some of those pictures and have caption contests, which is always a fun time. They have their own webcomic even, called The Fuzzy Five. When they hit a milestone number of likes they provide a coupon code for a decent discount.

In fact, it was those discount codes that finally made me cave and order my minis last month, and then made me cave again last week to order my first full-sized Squishable.

She arrived just the other day, and let me tell you, the timing could not have been better. Hugs have been needed around here lately, so she came in quite handy. Of course, even though when I started opening her box my daughter was in the other room, by the time I got the manatee out, Baby Girl had suddenly materialized to steal Mama's new toy. She's got a sixth sense, I swear.

Here's our whole squishy family together:


And just so you can get an idea of scale, here is Baby Girl with the Squishables:

And just in case you wanted more scale, here's me with my daughter and the squishies. 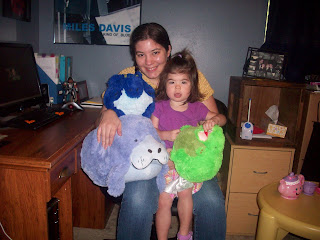 I am sure these are only the first of many that will make their way into our home. Thankfully, they live up their name and are, indeed, quite squishy, which means that you can jam them into a tight corner if space is at a premium! So yeah, I am a total convert. These guys are awesome. If you have room in your heart and home for some soft squishy toys, I cannot recommend Squishable more highly. I am pretty sure they have something to offer everyone.

Have a fantastic weekend folks. Until Monday, I bid you adieu!

*For the curious, the other two items on my "not gonna happen" wish list can be found here and here.
Author: SciFiTVFanGirl