Well, if you pay attention to weather news at all, whether you are in Texas or not, you know about the ridiculous "snowstorm" we had Monday night. I say ridiculous because to the rest of the world even a little bit north of us, clearly, we did not get that much snow, yet we (as a collective group) are freaking out about the snow, and the ice (which is, admittedly, actually pretty treacherous), and the fact that (with the windchill) the temperature has dropped below zero. Sigh. I grew up in Missouri, and the part of me that insists this is no big deal is constantly being reminded by the part that's been down here for over a decade that this actually is a big deal for us. We are just not as prepared to deal with this kind of the weather as most of the country is, it is as simple as that. So, everything that blew in and froze overnight on Monday led to yesterday being a snow day, which has carried over into today being one as well. I am of two minds about this.

Pretty much everything around our house is closed. We tried to order pizza for dinner last night, no go. My husband actually ventured out to pick something up, but nothing was open, and then he had some scary driving moments and turned around and came home. It's not that I mind cooking, really, it's just that I like to have at least the option to make someone else do it is all.

I don't know whether or not my trash is going to get picked up today (though I am relatively sure it won't). I dislike disruptions in my routine, also, it's a pain in the butt to get the trash all together and then not have it picked up. I did notice this morning when I went to take the kitty leavings out that many of our neighbors had put their cans out also. Either they, too, are hoping, or they were following our lead. Hmm.

Following the disruption of routine, today is grocery day. My husband has already told me that unless the temperatures warm up enough to melt the ice on the roads, I ain't going. He is right, of course, but I am having a hard time with this. Because it is GROCERY DAY. Sigh.

Rolling blackouts! Granted, I would much, much rather deal with a power outage that I know will only last fifteen to forty-five minutes. But not knowing when or how many to expect is a bit unnerving. We had our first one this morning, and now I am refusing to reset the clocks in the house until I am sure there won't be any more.

I don't actually like snow. Like I said, I grew up in Missouri, I got my fill of it then. I got in to both colleges I applied to--one was in Wisconsin and one was in Texas. I picked the one in Texas, this should tell you all you need to know about my feelings on inclement weather.

My husband, who got back from being out of town for over a week on Monday evening, got to stay home yesterday. He was working from home, sure, but it was nice to actually have him here all day after missing him for so long.

Hubby was actually supposed to fly out to Boston today for a business trip and be gone again until Friday, but the trip has been postponed and possibly canceled due to the ice that abounds. As much as it is a bummer that his trip isn't happening like expected, I can't say I am sad that he doesn't have to jet off again when he just got back.

My daughter is unlikely to see a lot of snow in her life, assuming that the weather trends don't change drastically in the next decade or two at least. So with it actually sticking to the ground and accumulating, she has the opportunity to go out and experience it (properly bundled up, of course). Hopefully we get a chance to take her out for a brief play time.

~*~*~
So, I have to admit, while there are a few good things about this weather, mostly it is just leaving me cold and cranky, which is really no state in which to write a blog. So, instead of adding to the negativity that already exists in the world, I will instead leave you with some pictures of my daughter, because she is super cute, and she usually manages to cheer me up. 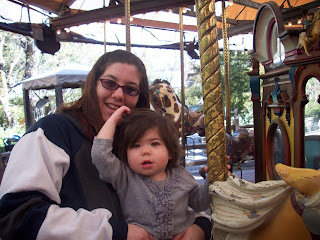 Ah, the good old days, when it was warm enough to go to the zoo. You know, last Friday. Baby Girl's first time on the carousel! 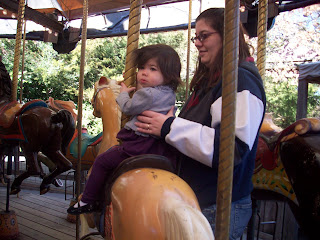 Of course, Baby Girl had to keep an eye on Grandma to see what she was doing (hint, it involves a camera). 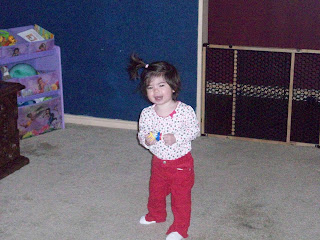 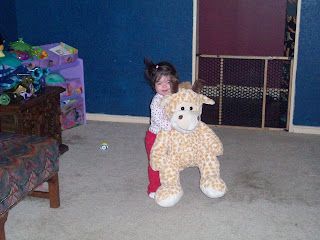 Of course, she had to get Rodney the giraffe to share it with. He is her favorite dance partner, you know. 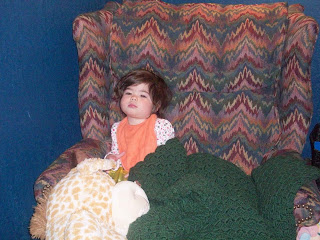 By lunch time though she was starting to feel the snow day air of laziness.

Stay warm out there cats and kittens!
Author: SciFiTVFanGirl